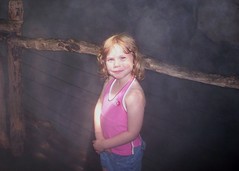 In the Mist
Originally uploaded by JayMonster.

The Bronx Zoo trip was an absolute blast for everybody. Nobody wanted to leave… mentally at least… but the feet were tired and it was getting late. I managed to get a couple of nice photos but nothing near what I had originally planned as I was too busy going from one thing to another and trying to keep up with the girls, who apparently have this whole park and the various “versions” of planned trails.

Versions? Yes. You see, there is no way you can see everything in the Zoo, it is simply too vast. You probably can’t spend as much time as you would like at various items and complete it even in 2 days. (Well maybe two days if you start out early and stay until closing).

Getting on the camel ride apparently requires getting there practically as the Zoo opens unless you are willing to spend a couple of hours on line, so it was not on our agenda for this day (Unfortunate for me as I was really looking forward to getting a picture of LatteGirl on the camel).

You can view the rest of the set of pictures here or just go to my flickr account here.