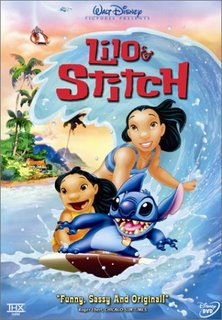 I have alway paid attention to what my daughter has watched on television. Our television for the better part of the past 5 1/2 years has rarely deviated from the Disney Channel, except of course when we moved over to DirecTV and gave her the “choices” of Disney Channel, Disney Channel West and Toon Disney.

Her favorites have varied over time, and she is now starting to outgrow some of the “baby shows” as she calls them, such as Winnie the Pooh, Bear in the Big Blue House and The Wiggles. Some shows that are very similar still hold her interest including Little Einsteins and The Doodlebops (to be honest, I think the Doodlebobs won out over the Wiggles only because of the Wiggles Overload stage she went through were it was “All Wiggles, All the time” for several months).

Now she is still growing up Disney, but the shows that are entertaining her are a bit more complex, Lilo and Stitch and Kim Possible constitutes her “Must See TV”. As a matter of fact I now have something like 48 episodes of Kim Possible and at least 2 dozen Lilo and Stitch episodes stored on the Tivo. These shows I do not mind, because they are still (usually) designed to teach some sort of lesson to the viewer.

However, now some new shows are entering the fray. Shows like, That’s So Raven, The Suite Life of Zach and Cody, and Phil of the Future. None of these shows are “bad” per se, particularly when up against some other choices. But they do not alway convey a “message” and even when they do it is a bit over her head (at least so far). The other problem (which is more MY issue than anything I guess), is that these shows bring up topics that are spurring new lines of questioning from my daughter than I am just not ready to handle. Granted, it is good that it makes her “think”, but I am just not ready for the questions she is asking.