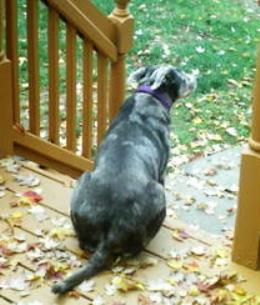 This is Sweetie. We found Sweetie wandering the streets. How anybody could just abandon such a wonderful dog is beyond me.

How do I know she was “abandoned”? Well, she had obviously been taken care of and tended to when we found her. She had a skin condition, and there were patches of her skin where the condition was worst that had been shaven in neat little squares. She also had the telltale markings around her neck of having at least fairly recently worn a collar.

My nearest guess is that someone got tired of vet bills and decided to take her for a “ride” and drop her off where she wouldn’t find her way home.

At the time, we already had a dog (Doc), and TheWife was pregnant with TheKid, so the last thing we wanted was another dog. We took her to the local PAWS shelter (where they do not destroy animals). Due to overcrowding, they had no room for her, and in an amusing momment, we asked the people at the shelter what kind of dog she was. The lady at PAWS, looked at Sweetie and stated, “my goodness, you are an eclectic mix of breeds aren’t you?” and informed us that she could detect several different breeds in her, but could not say with any certainty what breeds she was made up of.

We consulted with the regular shelter, and they informed us that due to her unique appearance, medical condition and the overwhelming number of animals that were in the shelter (they were overcrowded as well), that the liklihood of her being adopted was practically ‘NIL, and in all probability she would be put down.

Well, we could have no part of putting this wonderful animal down for no good reason, so we stopped at PetSmart, bought another bed and food dishes, and took Sweetie home with us. We of course didn’t know her birthday, so we decided to celebrate her birthday on the day she came to us. This is her sixth year with us, and the Vet estimated her to be two years old when we found her, so now we are celebrating her 8th birthday, and hoping for many more to come.

She has been nothing but absolutely nothing but the best pet anybody could ever have. She is loving (much to some visitors chagrin when she tries desperately to lick their faces), to everyone and has bonded with TheKid, so much so that when TheKid and I are “wrestling”, Sweetie gets agitated and barks at me.