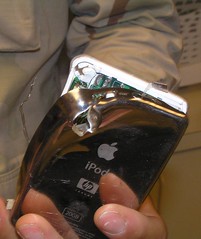 The iPod you see here was according to the accompanying story on Flickr, was carried in the shirt pocket.

“Kevin Garrad (3rd Infantry Division) was on a street patrol in Iraq (Tikrit I believe) and as he rounded the corner of a building an armed (AK-47) insurgent came from the other side.

The two of them were within just a few feet of each other when they opened fire. The insurgent was killed and Kevin was hit in the left chest where his IPod was in his jacket pocket. It slowed the bullet down enough that it did not completely penetrate his body armor. Fortunately, Kevin suffered no wound.”

If that isn’t a Picture Perfect ending to what could have been something awful, I don’t know what is.Â  (According to an update posted on the thread, an engineer from Apple showed the picture around, and Apple may be replacing it for the Soldier, which would be nice under any circumstances, but is even more outstanding since if you look at this iPod, it is actually a rare one that was actually from HP.)

Trying to keep some semblance of a holiday. Honey

One more cupcake (because... Well... because I got

This is what happens when you wake up way too earl

16 months ago, I could barely do 6k steps a day wi