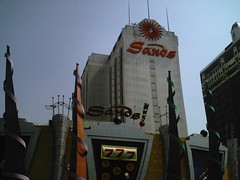 Perhaps it is just a sign I am getting old. I mean in general I am not one of those people that is adverse to change. But certain things, when they change make me sad. No particular rhyme or reason, some just affect me more than others. And the closing as well as as the pending demolition of the Sands Hotel and Casino in Atlantic City definitely qualifies.

The Sands was the first Casino to open in Atlantic City in 1978, but it was 10 years old by the time I first set foot in a Casino. In 1988, I was working on Wall Street, and decided it was time for me to make a trip down to the Atlantic City Casinos and try and play like a hotshot. I did, and I lost… big. But that is not the point.

When I selected where I wanted to go, I picked the one that sounded the most “Vegas” and the Sands which had a much more famous counterpart in Vegas fit that bill. It had that charm and feel of the Casino best depicted on television (an era that is unfortunately long gone). Even the nightclub was more of a Rat Pack style Lounge than the large theaters that now are used in most locations.

Over the years, I have lost more than I have won, but rarely did I leave the Sands over the years, without a smile on my face, having had a good time, in a place where the staff was friendly, as were the other gamblers/guests that frequented it.Â  It was my kind of place.

And now this relic, the piece of nostalgia is no more.Â  Scheduled to meet the wrecking ball for a newer, fancier and bigger casino. Â  It is the end of an era.Â  One that I will miss.