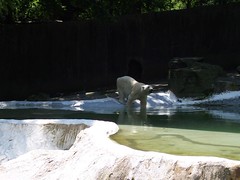 There is no hiding the fact that I am a Democrat at heart. Though this wasn’t always the case, and was at a time a self proclaimed “Alex Keaton Republican” (also known as a Ronald Reagan Republican). But those days are long gone, along with the Republican Party showing any sort of respect for our planet or the people of this country.

Every time I look at this picture I took at the Bronx Zoo earlier this year, the first thing that pops into my head is Senator Inhofe (R-OK) and his brain dead remarks calling the EPA “The Gestapo”, labeling global warming “the greatest hoax ever perpetrated on the American people.” Or how he pushed so hard for Bush’s “Clear Skies Initiative” which was nothing of the sort.

I mean, when Polar Bears are drowning because of insufficient amounts of ice at the North Pole, I don’t care how pro-business you are, it should at least give you pause to consider that perhaps something should change.

This really shouldn’t be a political issue. I mean, hell they may act like robots but these people have children too don’t they? Don’t they care at all what kind of a world we are leaving them with, or is that stock option really worth mortgaging their future for?

I am not talking about about the whole world turning into a bunch of , “Wheat Grash Drinking, Hemp Wearing Hippies” (not that there is anything wrong with that), but taking steps to at least begin to curb the damage we are doing.

More and more kids wind up (or are born with) asthma and breathing problems. Do we really need to wait until some Senator has a child die some horrible death before we start to act? Blue Skys, clean water. Is that so much to want for your children?