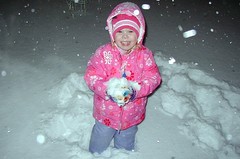 It has been a dramatically warm winter this year in the North East. We have had very few days that have actually even reached freezing, and except for a weird rogue snow shower that passed through a week ago leaving a dusting, snow has been more than rare.

This of course is much to the dismay of LatteGirl who LOVES snow. She commented after that brief snow that left, that we had better get some “serious” snow soon, because she needs to go sledding. She went on to remind us that, “I’m not gonna be little forever. And when I get big, I will probably not want to go sledding anymore! So I need it to snow NOW, so I can get full use out of my sled. When I get big it is just gonna sit there downstairs until I have a little girl”

Now several things freaked me out there. One, that she is so aware of how things change when you get older, Two, that she is in fact growing up just too darn fast for my preferences, Three that she plans on having stuff stored in my basement until she has kids of her own, and Four… Well just the though of my baby having babies is enough to send any father into shock.

But, she does love her snow. This picture was… Oh Good Gravy, this was Three Years Ago! And I tell you I had to beg, plead and BRIBE her to come in out of the snow that day.

But the darn smile, the sheer joy she exhibits… well it almost makes it worth breaking my back shoveling and wish for snow. Almost. 😉