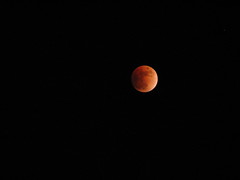 Now, admittedly, I already like looking at “the stars” and there is no doubt that I would have taken the time to see the lunar eclipse last week. But since LatteGirl would already be asleep when the full eclipse took place, I promised to break out my new camera and take some photographs.

In all fairness, it is a promise I never should have made. While I like taking pictures, I am by no means a “photographer.” Add to that, I have had precious little time to learn and play with all the new capabilities that the new camera has, and it was a recipe for disaster. But this was of course, the last total lunar eclipse until 2010, so I figured I would give it a shot (so to speak).

Now the week before (actually only several days before) we had some unseasonably warm weather.Â  But of course this particular evening was not so kind, and of course, I found myself out of firewood for the chimenea.Â  So, I brewed a pot of coffee, bundled up, set up the tripod and had at it.

With no real “second chances” to do this again, I fired off about 100 shots, at various depths of field, and shutter speeds and ISOs until I found what I thought was the best balance.Â  From there, I would take each picture from that level, and then again with both up and down two steps from there.Â  (Thank goodness, an eclipse is not a fast moving event).Â  In the end, I came up with about 20 shots that I am satisfied with (10 of which have already been uploaded into flickr, such as the one in the right hand corner).Â  I was wishing at the time, that I had made a greater investment for a real SLR and lenses, but truth be told, until I master the basics a bit more, it probably would have been a waste.Â  A camera is only as good as the person working it, and I still have some learning to do.

With about an 80% “failure” rate, I was seriously wondering why they hell I went through all of that.Â  Until the next day.Â  As I was sorting through the pictures, and using Gimp to clean them up a bit (BTW, image processing, another area I have a LOT to learn.) LatteGirl came over and spotted the pictures.Â  She was thrilled.Â  She loved them all (even the less that great shots), and spent the better part of 10 minutes hugging me and thanking me for all the “great” pictures of the eclipse.Â  She even begged me to print out of couple so she could show them off at school.Â  Suddenly, I forgot how cold it was standing out there for several hours, or how little sleep I wound up getting before heading off to work the next day, or how disappointed I was with having so few decent shots to show for the effort.Â  Suddenly, it was all so worth it.