Where to start? Some of the photos from Disney World are over in Flicker. Some, because some are still in a camera, plus more are in a disposable camera (thanks to a battery blunder… don’t ask.) that still need to be developed.

In some ways I have so much to say about this vacation, but in others, I am sure much of it is probably obvious to many (if not all). I don’t want to bore (Hey! I heard that!) , but do want to share some of the ups and even (few) downs from our trip, and the lessons we learned on this first excursion to the House that was built by a Mouse.Â  It is tough to begin when you feel like you have too much to say, especially when you find it hard to describe how magical (yes, fine, I used it… Magical… It really does fit.) a place it really is, and what a wonderful trip it was.

As I alluded to earlier, Walt Disney World in Florida is simply huge. Until you actually see it, you really have no idea just how big the whole thing is. This is both something that makes for a pleasant surprise, and yet makes it all seem quite daunting. 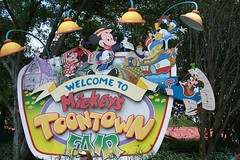 There are tons of books out there on navigating, surviving and even affording Disney (I will list a few of my favorites later). And now I see why. I feel like I have only scratched the surface, and already, (if I was a real writer type) I could already fill a tome or two with information. When people say you need a plan of attack, to maximize your time, they are not kidding. It is really easy to get overwhelmed if you allow yourself to.

Since I had gone to Disneyland for a day back some 10 years ago or so while on a business trip, I thought I had things, “covered.” I thought I knew the score and what to expect. I couldn’t have been more wrong. Oh Disneyland is nice. It is entertaining, and certainly has some of the charm of Disney. But by and large, it is far more like a Six Flags Park than it is to the grandeur of Disney World Florida. 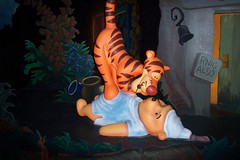 I will go into more detail later, but just let me say, if you are planning to go to Disney World in the next 6 months, the time to make your reservations for either a breakfast or dinner with the characters, especially the one at Cinderella’s castle, the time to make your reservations is right now. Not tomorrow, not next week, but now. Otherwise you may find yourself on the outside looking in at these events. We did manage to get one breakfast with the Princesses and one with the Playhouse Disney characters, but were shut out from others because of our timing. (And it was only thanks to a cancellation that we were able to get in on the Playhouse Disney breakfast).

I had planned this as a “once in a lifetime” type of trip, and probably spent way more than I should have, but to be honest, at least so far, I do not regret it. We did manage to save a few dollars here and there being smart with things like, getting the meal plan. This was not only a huge money saver, but a plain great deal. It didn’t restrict our eating in any way since we never left Disney World, we got to eat wherever and whenever we wanted, while saving a ton of money over paying for every meal separately. 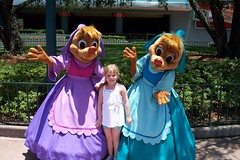 My wife being far wiser than I was, and knowing full well that we would most likely return at some point, purchased passes for 10 Days. You see the more days you buy, the less it costs per day. And for a small additional fee, the passes never expire. So we used 5 days worth on this trip and for just slightly more money already have the 5 days for our next trip already paid for. Lest I forget, especially if you have children where you may not wish to spend a full day every day in the same park, the “Park Hopper” option is also a great addition to maximize your time, and so you don’t wind up “stuck” one day because the kids are “done” with a particular park early. Again, I will give more details later, but being done with a park early is definitely a possibility with in particular those younger than tweens/teens when you go to Epcot. Epcot is great in its own right, but definitely short on things to entertain the little ones.

I could probably continue this post on forever, but in the interest of brevity, readability (aww, c’mon now! That wasn’t nice.) and to hopefully put this into to sort of order, perhaps I should stop babbling…. for now.

Trying to keep some semblance of a holiday. Honey

One more cupcake (because... Well... because I got

This is what happens when you wake up way too earl

16 months ago, I could barely do 6k steps a day wi